Waylon Jones (ウェイロン・ジョーンズ, Weiron Jōnzu), also known as "Killer Croc" (キラークロック, Kirā Kurokku), is both a fictional character and antagonist of the M.D.C series created by C. B. Cebulski and Jim Lee. He is one of Batman's common opponents.

He was born with a form of atavism and a rare body mutation that only slowly changed him over time, taking the appearance of a half-man, half-reptile. Waylon was constantly bullied and taunted by his aunt because of his reptilian appearance.

In retaliation to his discrimination after finally reaching his breaking point, he killed her. Waylon eventually became detached from humanity, and his misanthropy grew as did his bestial nature, pushing him to a life of crime and a cannibal murderer.

Since then, he began to accept his place in society as always being seen as a monster. As years passed, his condition would make him more and more into a monster, eradicating any traces of humanity that might have been left as he became a monster in body and spirit.

"I will enjoy feasting on your bones!"

Born with a rare mutation that made his skin green and scaly, and which grew his body to grotesque proportions, Waylon Jones was raised in a genetics research facility for study. He briefly worked as a carnival freak under the name Killer Croc, but his misanthropy grew as did his bestial nature, pushing him to a life of crime. As his physical condition and mental state deteriorate, Killer Croc becomes a more bestial foe, increasingly detached from humanity. 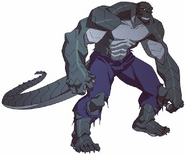 Plot in the Series[]

Community content is available under CC-BY-SA unless otherwise noted.
Advertisement